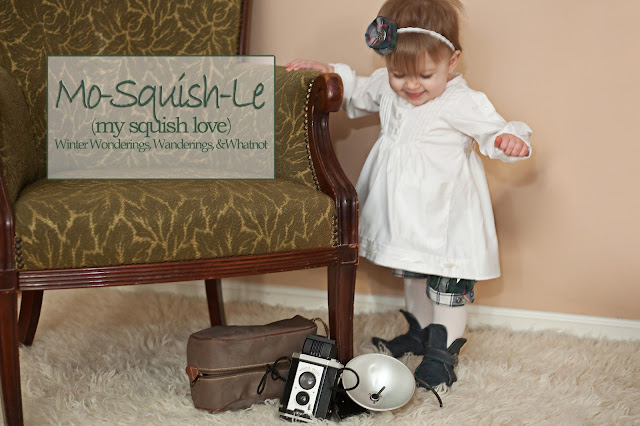 OK - lets start with the name ;o)  Within hours of holding baby girl in my arms, I had nick named her 'squish'.  You see I don't really find brand spankin' newborns to be  'pretty' or 'gorgeous' or 'beautiful', at least not mine.  In those first hours and sometimes days, they are just kind of squishy - thus Squish, and it stuck.  Now my husband is a movie buff and within the first week started calling her 'Mo-squish-Le' in reference to Million Dollar Baby where Hillary Swank's character is called 'Mocuishle'.  The term translates from Gaelic to English to mean 'pulse of my heart' - and that is simply what she is for her dada and I.  Using this name for this week's look fits not only the celtic undertones of the outfit, but also the fact this this baby can take a lickin' and keep on tickin'.

Now on to what we are all really here for... the SEWING!!!

REFASHION WEEK!!!!  To say that from the moment I learned what the challenges would be this was the one I was the MOST excited about would be an understatement.  Most of what I sew is a refashion of one kind or another, quite often I use cast offs simply as yardage; but I love the fun of incorporating existing elements from existing garments in fun or unexpected ways.  This outfit (along with Elephant Shoes) were the only two I had completely drawn and planned before the competition began that came into fruition the way I planned - well mostly.
You see this week has been anything but what I planned.  It started with A getting the stomach bug on the way to church on Sunday, followed by baby girl getting her first tooth knocked out and having her first trip to the ER on Monday night, continued with the entire house (save my husband - THANK GOD!) getting a worse version of the stomach bug on Tuesday.  Which lead me to Wednesday, scrambling to finish my cute little ensemble that sat wondering if it would see the light of day while the stomach bug still wages war on all of us.

But here they are - both baby girl, and outfit - maybe missing a tiny piece of what they had/had planned, but perfect just the way they are. 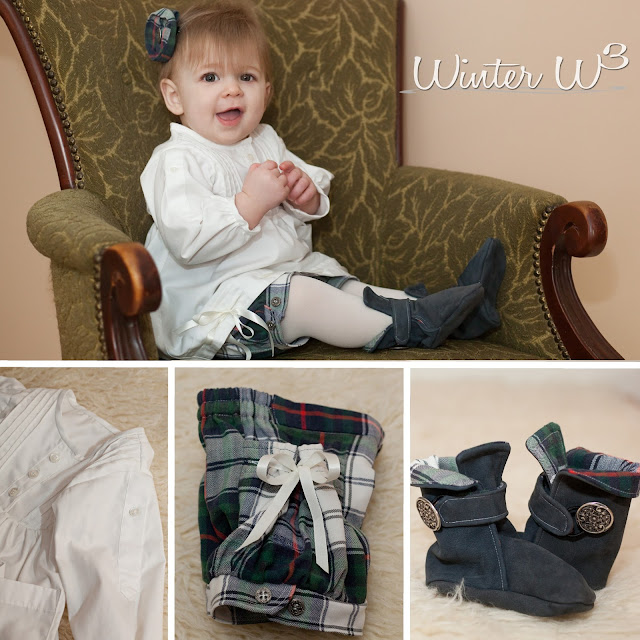 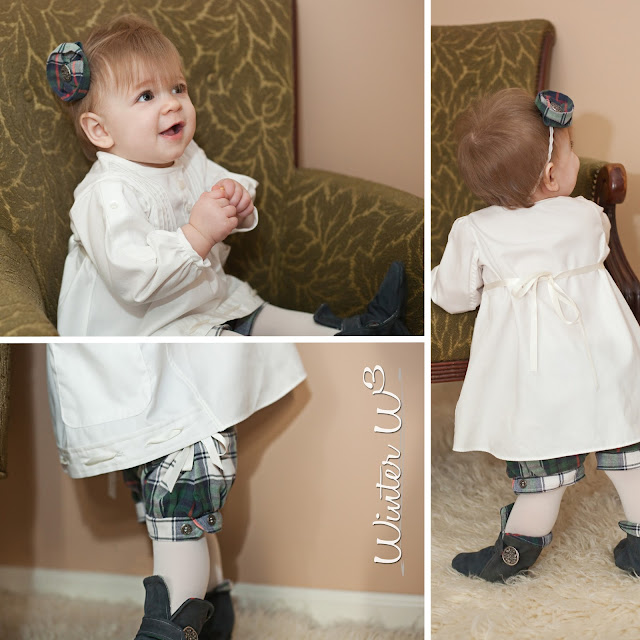 Piece by Piece:
The Top: 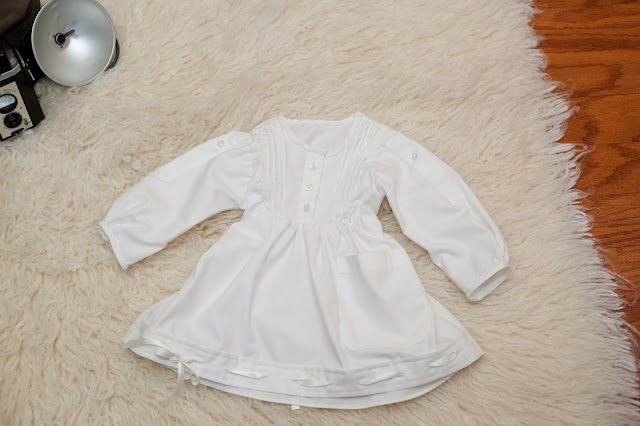 I went with a traditional men's white dress shirt for the top.  I've been wanting to create a bib front top with pin tucks since November when a bib front top caught my eye as I was searching for inspiration for Heidi's 'Knock Off' series.  Of all the gazillion choices out there, I went with a white shirt for two reasons.  First, I just think it is a great staple neutral that you don't see enough of on babies and toddlers - and I love white on baby girl (*I know people think it will just get disgustingly dirty, but white can be bleached and cleaned without risk of color fade).  Second, I had a few white shirts as options already in my stash.
As I designed and created this top, I really wanted to use as many details as I could without ending up with a product that was obviously a men's shirt originally.  I used the pocket, button hole placket, shirt tail hem, and cuff plackets from the original.   My husband encouraged me to include the pocket when I was second guessing myself, so it was carefully removed from the original and attached to the new front.  The button hole side of the front placket was removed from the shirt and re-attached to the bottom of the front section of the top.  There it became the perfect ribbon detail edge after new button holes were added to increase the amount of ribbon weaving - I added an extra button hole between each of the existing ones.  The great thing is that the ribbons can be changed out for different looks, but I really wanted to keep this a clean and sophisticated white on white.  I discovered when making my mock up that the original shirttail hem gave me a slight Hi/Low hem, and I loved it.   And the detailing on the top of the sleeves is the original cuff placket - maybe my favorite detail of the entire shirt. 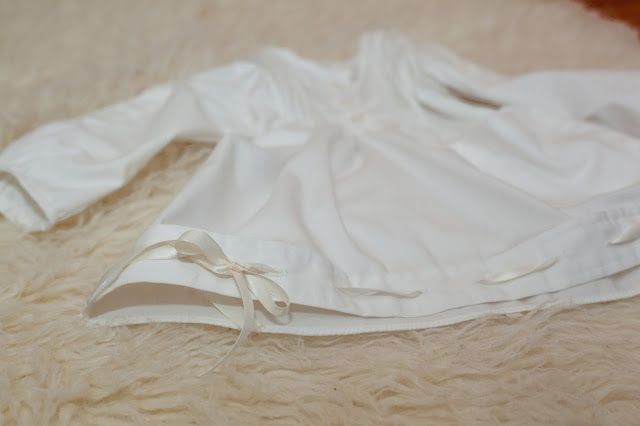 The back of the shirt ties back from the sides- this allows the top to grow with baby girl and gives her an easy range of motion. 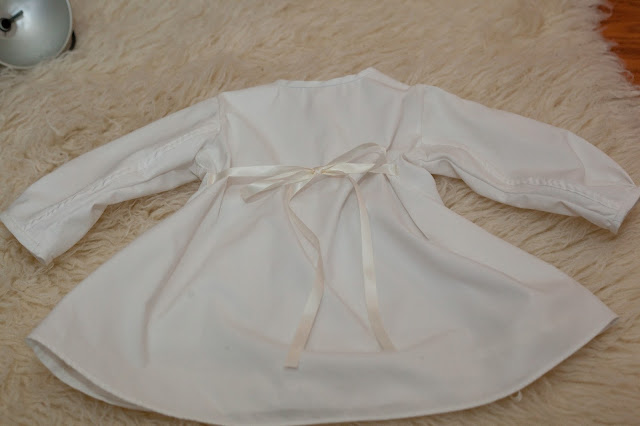 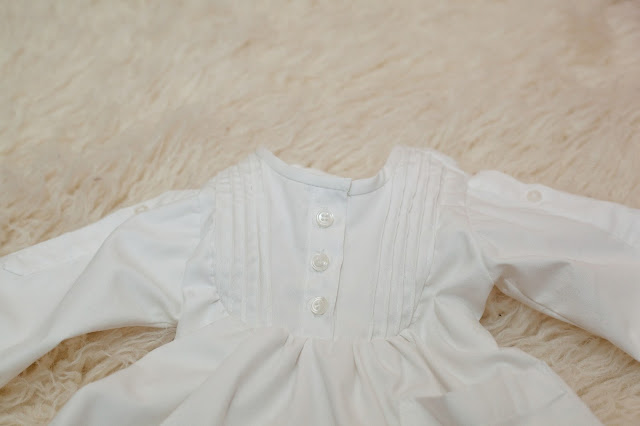 The Shorts:  I have been in love with Heidi's pocket shorts tutorial since I first saw them on her blog Elegance and Elephants.... and I have just been waiting for an excuse to make them.  Now I knew I wanted these shorts to be a bit more tailored, so I wanted an elastic back and flat front.  I then stumbled upon a great basic short pattern from  Angela at Crafting Zuzzy that uses a box pleat in the front, and with some careful finagle-ing, I figured out that I could Frankenstein the two together.
I went with a flannel men's shirt in plaid - yes plaid!  I've been trying to stretch myself in each challenge, and pattern matching is something I either avoid or try to make easy for myself.  Ummmmm, this was not an easy plaid.  For one thing, it was already cut into this shirt, so it was hart to line up the plaid to cut duplicate pieces, I might have saved time just cutting every piece one at a time.  Then I went to cut the pockets, and realized that if I wanted to use the button placket for the top I would have to add in button holes (unlike my plain flannel shirt mock up where I just cut two pockets with the button holes in the same alignment.)  Then it hit me that the way the placket was sewn on changed the pattern of the plaid, so I made the executive decision to make sure it would match at the top. 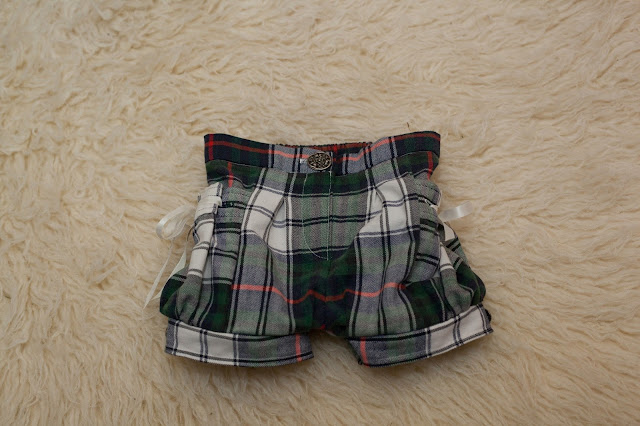 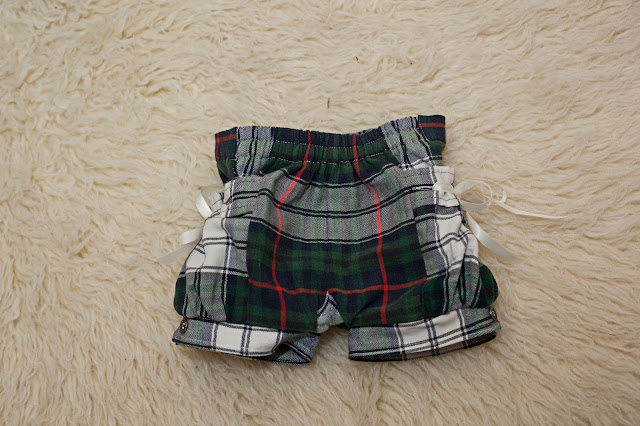 But oh those pockets, I am actually a little in love with them not pleated - they become bucket pockets and have such great dimension, but a little overwhelming for baby girl at this stage.  I used the same ribbon as on the shirt to gather the pockets through 4 button holes into box pleats that flow perfectly with the box pleats on the front of the shorts.  The final silhouette is much more appropriate for this little girl on the crawl. 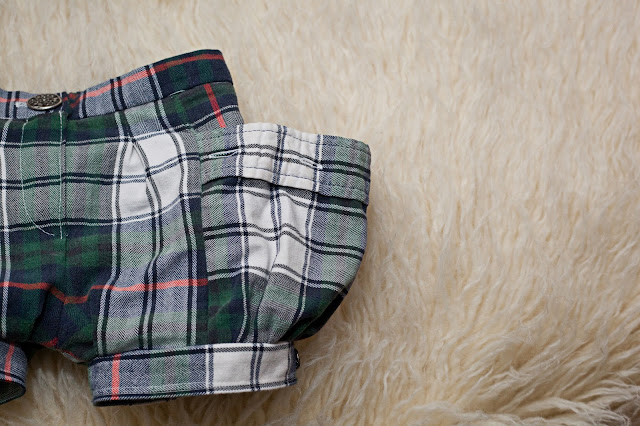 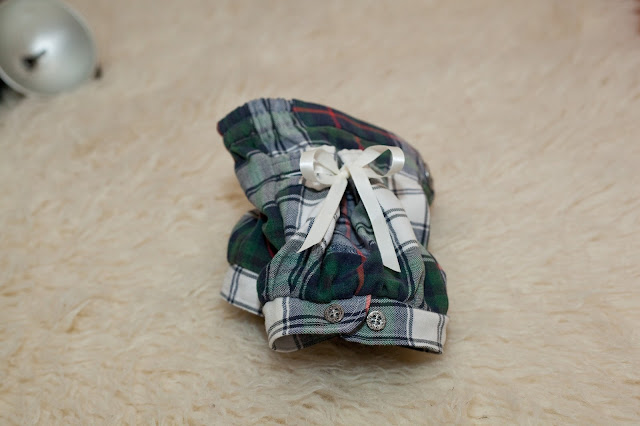 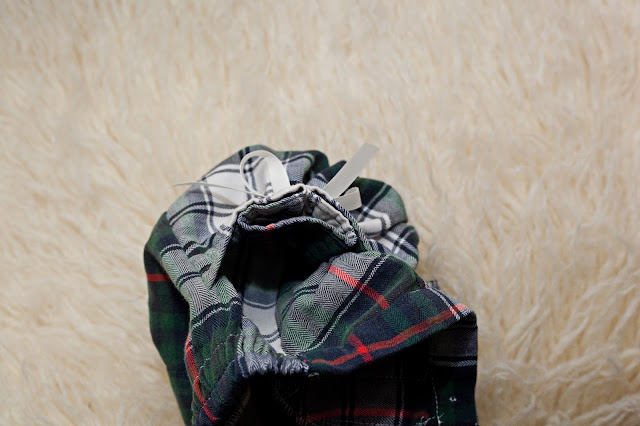 (overhead view so you can see the pleating)

The bottoms of the short legs are finished off with cuffs inspired by the original cuffs of the men's shirt.  My plan was to use the original cuff, but on careful inspection I noticed that they were starting to fray in a few places and that just wouldn't do.  So I cut new cuffs and added two buttons on each to match the main button.  Which match the buttons on the...

BOOTS:  I fell in love with Shwin&Shwin's Little Red Riding Boots just for the name.  I almost made red flannel ones for this outfit, but then remembered that I have LEATHER.  Not pleather, not some other thing, but genuine suede leather in the form of a bomber jacket of mine that my mom held onto since middle school for me.   It is a nice navy blue that plays perfectly with the blues and greens of the flannel.  I had to size up their pattern since baby girl has the longest feet ever and then I lengthened the rise of the boot so that it could come further up her leg and have a little bit of fold over to show off the flannel. I then added elastic loops to the straps to make the button functional and the boots easy to get on and off. 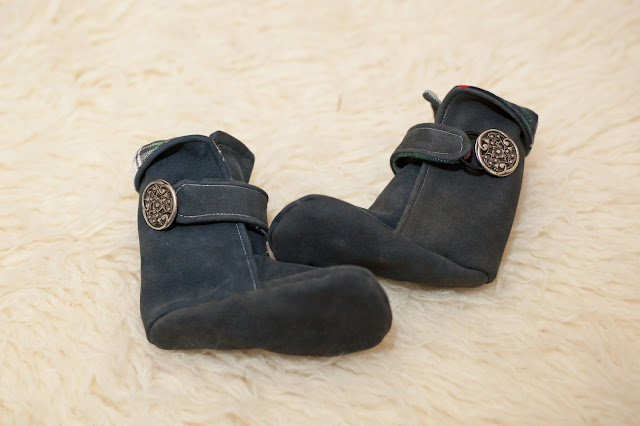 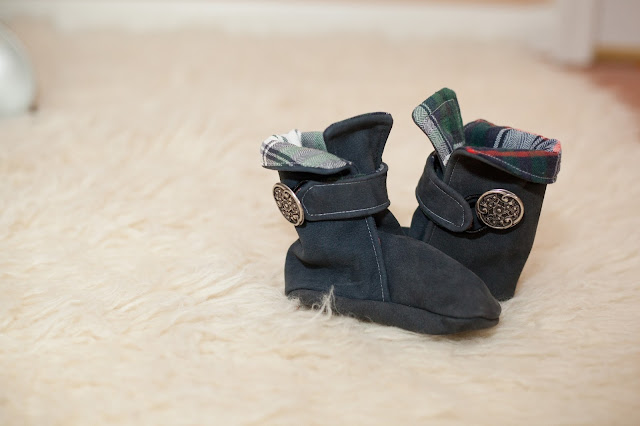 And a couple more of baby girl: 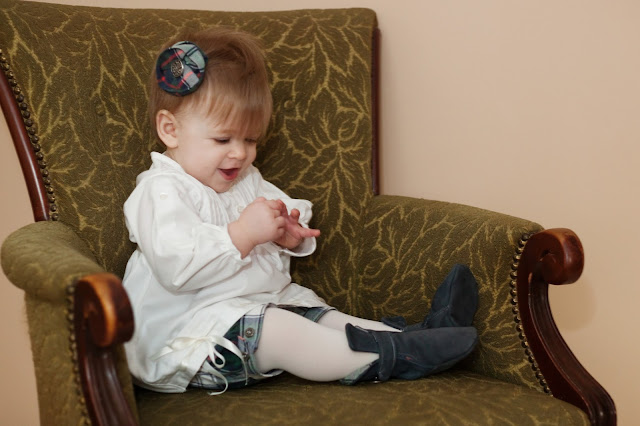 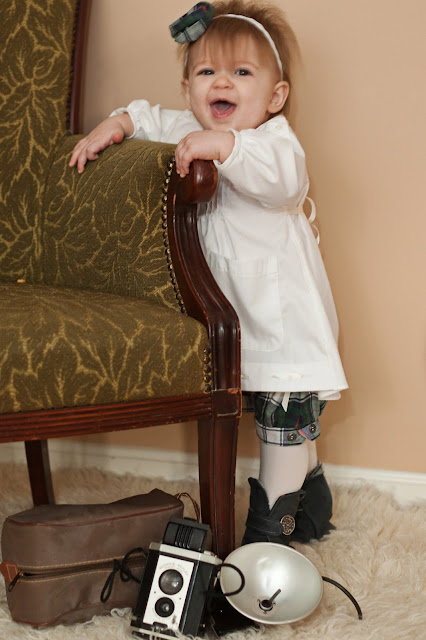 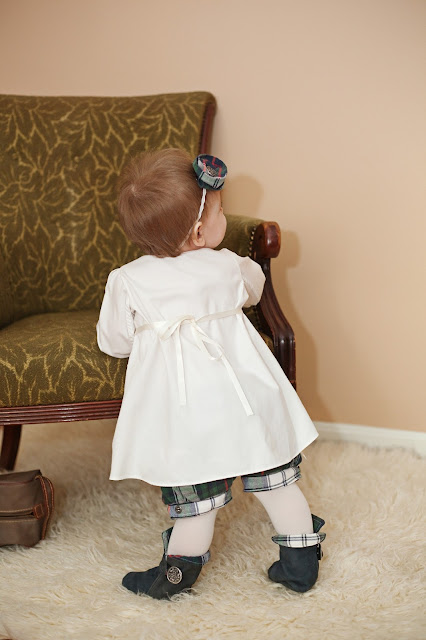 Thanks for stopping by!  Head on over HERE to see all the other entries and vote for your favorite!

Posted by Suzanne Winter at 7:51 AM